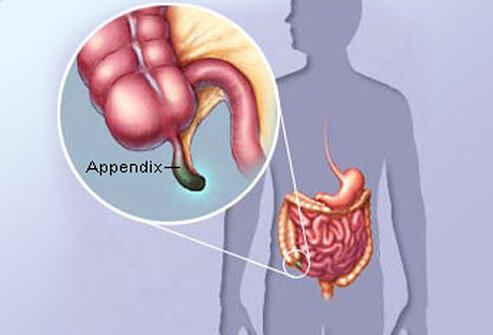 Appendix, a 3.5-meter long tube in the body that has no known purpose can cause emergency medical conditions. According to a study, more than 300,000 appendix surgeries are performed each year. It is the most common abdominal surgery which is commonly performed in children under the age of 14. Appendicitis symptoms should not be avoided and taken seriously and also requires emergency medical attention. A person can safely live and do well without an appendix.

Appendicitis is a condition when your appendix becomes inflammable due to the presence of bacteria and pus and put it at the risk of damage or rupture. When appendix becomes inflamed it shows symptoms such as severe abdominal pain, vomiting, and loss of appetite. With the passing of time inflammation gets worsen and becomes more severe.

When the pus and bacteria inside the appendix multiply quickly it can cause the appendix to rupture. When it ruptures, the bacteria spread to the other organs and bloodstream and cause emergency medical conditions.

The most common causes are-

2. Obstruction of foreign particles in appendix

3. Blockage in the appendix

Risk factors for appendicitis include-

2. Sex: Males are more susceptible to develop appendicitis than females

4. Infection in the body

How Is Appendicitis Diagnosed?

How Is Appendicitis Treated?

Appendectomy which is a surgical process to remove appendix is considered as the best treatment option for all the cases of appendicitis. In some cases, antibiotics can be prescribed to eliminate the need for surgery.

Can Appendicitis be prevented?

Usually, there is no way to prevent appendicitis but the occurrence of it can be reduced by adding more fibrous fruits and vegetables in your diet.

Here are Some Ways to Boost Appendicitis Recovery faster-

2. A cough carefully to prevent pain

Appendicitis is serious and should be treated on time. In case you suspect other problems after treatment, consult your doctor to prevent complications.